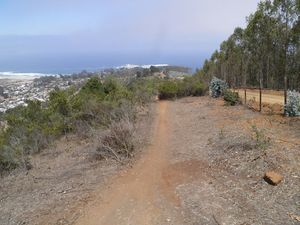 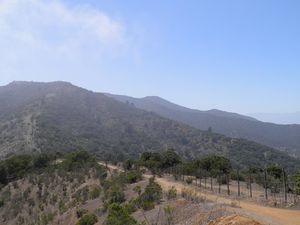 From the vicinity of the antenna 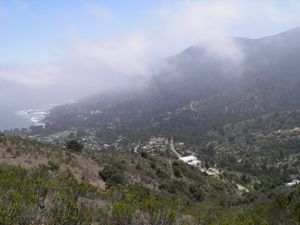 View towards Zapallar, from the vicinity of the antenna. Looking north, February 2014 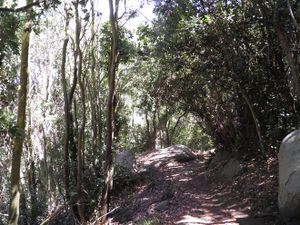 Leafy vegetation in the upper area of ​​the Quebrada del Tigre

Description of the area of ​​Aguas Claras - Quebrada del Tigre

This route runs through an area frequented by cyclists who spend the summer in the area. In the southern sector, there are well demarcated circuits, parking areas, services, etc.

Part of the route is along eucalyptus forests, partly on bushes and scattered bushes, and part on attractive native forest.

In some areas of southern exposure the vegetation is surprisingly leafy for that latitude, and very attractive. The dominant species are Belloto del Norte ( B. Miersii ) and Olivillo ( Aetoxicum Punctatum ) plus the typical species of sclerophyllous forest of the central zone, such as peumo, boldo , colliguay, liter, etc. The presence of a mirtacea stands out, Mirceugenia Correafolia . There are specimens of naranjillo, some of them huge. There is also a lot of quila.

From Viña, it is 64 kilometers to the diamond point that forms the southern entrance to Cachagua. Put the mileage to zero at that point.

'To start from Cachagua' : It is 670 meters from the south entrance towards north. There is not a door, but a wooden gate. If you come from the north (Papudo or Zapallar) put the mileage at zero at the northern entrance to Cachagua. It is coincidental that they are also 670 meters south to the point described above.

'From Zapallar' ': Ascend through the urbanization located 3.32 kilometers north of the southern entrance to Cachagua, or, if coming from the north, 620 meters south of the main access to Zapallar. After the pavement ends, you come to a fork: take the LEFT and you will reach the antenna, from where you should continue along the route described here along the edge

From Valparaíso and Viña del Mar, there are frequent buses to La Laguna. From the bus terminal of La Laguna, it is 5.3 kms until the detour to Aguas Claras (although with an important ascent and descent in between), from where this route has been described.

There are also local minibus buses to Cachagua and Zapallar that pass through the very beginning of the route, which can be taken in La Laguna.

From Santiago, there are several buses that arrive to La Laguna ($ 6,500 in summer 2014) and, less frequently, to Zapallar and Cachagua, which pass through the very beginning of the route. 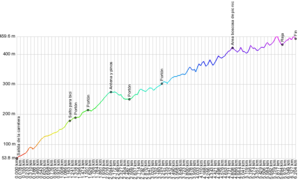 Profile of the trek through the Quebrada del Tigre (the "saw" on the upper part is somewhat exaggerated, and is the product of inaccuracies in the 3D model)

Pass under the wooden gate (km 0 - 54m). The start is somewhat confusing, but you can see a narrow path that goes towards Zapallar almost parallel to the road, at first with little slope. This section is very unattractive.

After 380 meters, you should turn right and start ascending the slope. The slope increases sharply. You will pass by a bicycle jump and next to a pond of water. The path heads in the edge direction North, and the route becomes clearer. This section is dominated by eucalyptus and matoralles. Little by little you get a view of the beach and the ocean.

You will go through a second bike jump and then through a couple of bars and their respective gates, normally open. At km 2.1 (274m) you pass by a telecommunications antenna, where the alternative coming from Zapallar converges. Immediately afterwards, the trail goes down 25 meters, and then continues climbing uninterrupted until the end. From the antenna, there are 480 meters of horizontal walk until it is ingested into the forest.

Once in the forest, the route is obvious, as there are no more alternatives or bifurcations, and it becomes increasingly attractive. Gradually, the native forest becomes denser and denser, until it forms true vegetable tunnels in the wide area. It is a constant ascent, but with moderate slope, interrupted by the cyclists that descend (frequently, at full speed).

At km 4.8 (420m) you reach a wide area, under the shade of the forest. It is an excellent place to rest and to make pic-nic. It may take a while to pick up the trace after this point: aim not at the part above, but in the direction you were walking.

Follow the most attractive section of all, with denser forest. The walk continues without interruptions or bifurcations. You will pass by a wooden sign indicating "Quebrada del Tigre: private area", and then by some clearings. A fence will cross (km 6.0 - 427) and continue until km 6.3 (455m) point where the track begins its descent towards the South, entering a more dispersed vegetation area. If you have energy, you can continue and complete the Travesía Aguas Claras - Quebrada del Tigre in the opposite direction, but for those looking for a shorter trip this point has been defined as the end of the Quebrada del Tigre route. Tiger.

Network of bicycle and hiking routes in Cachagua / Zapallar