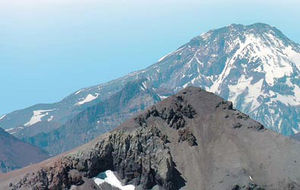 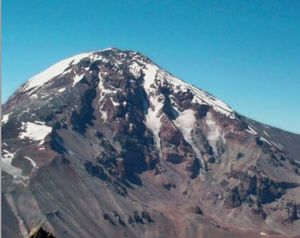 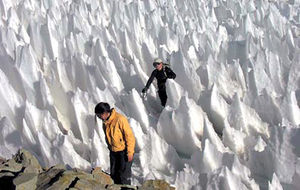 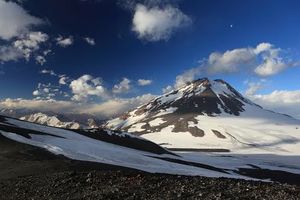 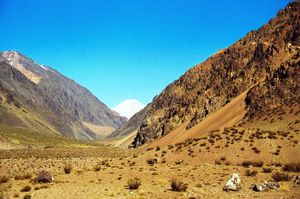 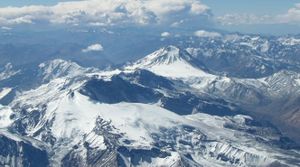 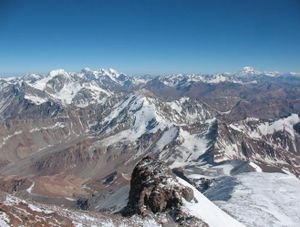 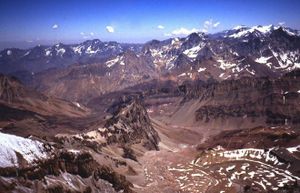 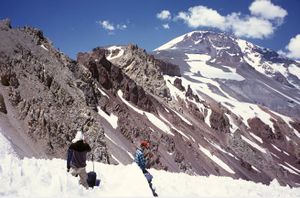 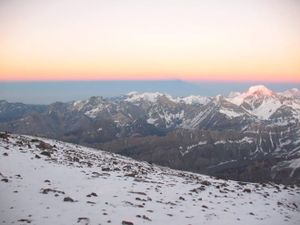 The Tupungato Volcano rises as the highest mountain in the Central Andes, far surpassing its closest neighbors. It is located 64 kilometers east of Santiago, on the border with Argentina, but it is not visible from the city.

It is widely desired by many mountaineers, and is cataloged as a classic mountain of the Chilean Andes, despite being paradoxically more visited by foreigners than by national mountaineers.

This giant is an extinct stratovolcano whose crater three kilometers in diameter is easily visible from far away. Its summit, as well as its slope that falls towards Argentina, sports extensive glaciers that cover it partially.

A passenger plane of a British company fell on their skirts in 1947. Only 44 years later, in 1991, a pair of mountaineers He accidentally found an engine. A search expedition was organized that finally found the rest of the aircraft and its occupants.

December to March. Ideal is late December or early January, when the days are shorter and most of the winter snow has melted without too many have been formed penitents. A winter climb is a very sacrificial and lonely maneuver.

From Santiago, go towards Cajón del Maipo on Route G-25. From the Vizcachas junction (Camilo Henríquez Avenue and Eyzaguirre Avenue), there are 17.2 kilometers until you cross the road that goes up the Colorado River (to Maitenes and Alfalfal), at which point you should turn left, a few meters after cross the Colorado River.

From this point, there are 23.2 kilometers until the end of the road, where there is the barrier of the Alfalfal Power Plant, owned by AES Gener. Up to this point, the whole road is paved. Here the permit must be shown (see respective section)

Then, follow the gravel road in good condition. Follow the main road for approximately 25 kilometers, where there is a fork that leads to the La Perla mine on the left. Continue through the option on the right and after a small section there is a detour to the right signposted Estero Chacayes, which is necessary to take. The road passes through a hamlet and then twists to continue entering the valley. Just before the road begins to descend towards an intake, it is possible to see a marked path that starts from the right side of the road, where you can leave the vehicle (Chacayar - 2,130 meters). .

It is not possible to access if you do not have a vehicle. 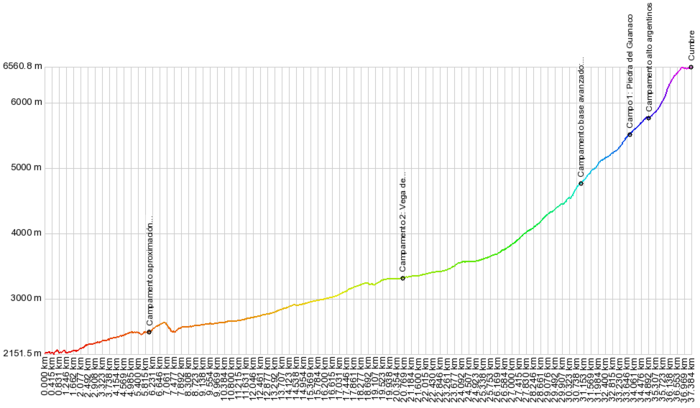 Ascent profile to the Tupungato Volcano

The approach continues through this path that goes along the shore South of the Colorado River. After two hours of walking it is opened by hand right the Valley of the Museum and after a small descent you arrive to the area of ​​Baños Azules, where there are pools where mineralized water very close to the Museum River. Here it is possible to establish a CAp1 (2450 m).

From the CAp1 start the march early and cross the river using the big rocks that there are as natural bridges. The route continues along the left side of the Museo River, rising towards the edge of a small hill known as Pan de Azúcar and descending later towards the shore of the Azufre River. It is also necessary crossing this river, which can be done by a bridge that although It is quite deteriorated is still used. Anyway, recommends checking carefully the state in which you are before crossing it.

Once on the other shore, the route will take you up several meters and to cross a wall of black volcanic rock that leads to a vast drawer. From here you can contemplate a spectacular deployment of summits, among which are the Chimbote, the Pollera, the Tupungatito, the Sierra Bella and the west face of the Tupungato Volcano. Following the path you will reach the Baños del Tupungato, a well natural thermal water of dubious appearance, where it bends towards the right and continue ascending in some sections, until you reach to a sector known as "Mal Paso" due to the numerous streams that you have to cross. The CAp2 (3230 m) is established in the Vega de los Flojos, at the foot of the moraine of Sierra Bella, for which is necessary to climb in advance by very slippery carts. Yes well it's a pretty humid sector, the only reliable sources of water are the streams and springs found in the highest part of the fertile plain.

From the CAp2 the path is lost in a valley of stones and takes up the southern slope at the beginning of the moraine of the glacier Sierra Bella. At this height the river is a simple stream that must be cross from time to time. After a few hours of walking the path leave the valley and turn south to climb the slopes of the Tupungato Volcano following a stream without name. The route takes to Camp Los Españoles (4420 m) where you can establish a CAp3, but if you are with time it is recommended to continue until the area known as El Hito, where the CBAvanzado (4790 m). In this place there is abundant water and you have the view of the ascent route, which is very motivating. Generally the arrieros can only advance here.

From the Advanced CB begins the ascent on the left side of a field of penitents. When you get to a plane you need to go to the left to take an edge that leads to some terraces with stones of curious shapes, sector known as Piedra del Guanaco (5530 m) and where C1 can be established.

If you have enough time and energy after the hard day, you will recommends continuing on the edge to a sector of wide terraces known as Argentinos (5760 m) where it is suggested to establish AC. In this place you can already get a very good view of what which will be the final route of ascent. From the CA, start climbing up the edge that is to the right of the nevero almost to go up, to then walk to the feet of the gutter that is on the left side of a nose or very large square rock. This channel has a slope average of 40º, is formed by thin and slippery hauling, and is the path where the ascent continues. When you leave this one you can already to see the false summits, both on the left and on the right. Continue road to the Southeast following the highest altitude, until reach a plateau from where the North Summit is observed with Way of the hill, heading South. The South (main) summit is reached going down and up the next hill.

The descent is made by the same route and does not present major difficulties, except in the stone sector that is between the snowfield and the gutter.

Hiring horses and or mules