An attractive more wild tour offering a perfect alternative to the other far more popular areas of the park. it is also good conditioning before taking on the circuit or other longer treks in the park. 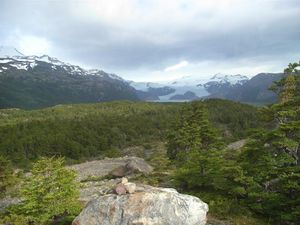 Drive out of the Administration at Rio Serrano and take the first left then the first right onto a good quality gravel road. Drive to the end at Hostal Lago Grey

You can radio in a transfer from the administration but these cost a hefty $9000 per person. If there is only a few of you hitch hiking is a better option as the road is well used. Hiking it is really not recommended as it's 17km of fairly boring road walking. 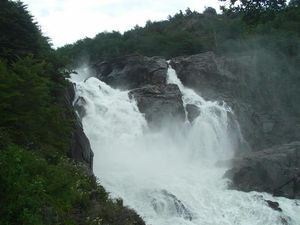 A sign post from the car park to campmento Pingo directs you down the well marked trail with regular orange sign posts. The route to Pingo is an easy 3km in a sheltered valley. At Pingo there is a camp ground, an abandoned refugio and good views of Cerro Paine Grande. Keep following the trail as it follows the river before ascending into beech forest. There is a very short side to trip to the right of the path before a bridge to Cascada salto (waterfall waterfall!?) which is well worth exploring. After this the trail climbs roughly 200m into thick attractive forest which gets a little dull after a while. The trail continues bumpily along before descending to reach the turn off for Pingo falls 7km from campamento Pingo. Here you can take another worthwhile 1km diversion to the noisy Pingo falls where the river thunders down over the rocks. Once back on the trail it's a fairly flat further 2.5km to campamento Zapata on a picturesque bend in the river (the Refugio was burnt down a few years ago no matter what your map and the one in the administration! says).

The campsite is in a beautiful grassy clearing with a fine view of the Paine massif behind. The nicest pitches are in a little alcove of trees close to the river. From the campsite it's a quick and easy 3km to mirador Zapata from where you can get fantastic views over the whole valley and of Lago and glacier Pingo in the distance. Since this is only a short walk from the campsite there are plenty of further options to occupy you if you stay at the campsite for the whole day. The first and most obvious is to descend to the laguna below and round to the left. If you don't mind getting wet and the waters are low you can get around the two inlets to the laguna and up onto the South Patagonia Ice Field beyond or up Cerro Zapata, a none technical peak of 1533m (wind permitting). This is best done in late summer when the rivers will be lower. Another option is to follow the path from just before the mirador when it branches. A faint trail leads along the side of the valley and then descends to the remote Laguna Los Tres. 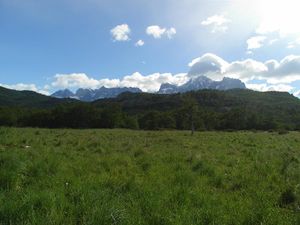 Campamento Zapata
From here you can cross the river higher up (getting a little wet) where it is marked by a cairn and then follow the cairns along and then up to a get views over the ice field next to small glacial lagunas with chunks of ice floating in them. Another option if you have plenty of time and experience is a wilderness route down to Lago Tyndall and back to the Lago Grey road (further information on these options taken from Chile and Argentina Bradt Trekking Guide)

Finally the route to Lago and glacier Pingo no longer exists (despite being labelled on most maps) as a bridge on the path kept being washed away but for experienced navigators who don't mind getting wet it should still be possible when the rivers are at their lowest (although the path from the campsite is already overgrown and unclear). Go back to Lago Grey the way you came.

It takes 3-4 hours to get from Lago Grey to Zapata and another 45 minutes to an hour to get to the mirador, back is roughly the same times as the amount of accent is similar.

Embrassingly for Chilean pride the best map of Torres Del Paine, images of which you can't escape in Chilean culture and tourism, is an Argentine one. Zaiger and Urrupty produce a clear and more importnately up-to-date map of the park complete with technical and some wilderness routes. Maps available in hiking and tourist shops in Chile (e.g. JLM) are universally out of date marking refugios and paths where they no longer exist. They often also disagree on the lengths of routes. The map given to you at the entrance of the park is preferable simply because it is up to date however it is on a large scale, very simple and with few contour markings. given the general confusion surrounding the lenghts of route it is large to tell whether these are accurate.

-Given the stunning views from the mirador and the fairly boring route to get from Pingo to Zapata it really is only worth doing this walk if you go all the way to the mirador. While the walk can be done in a day it would be a long and very strenuous one. Another option is to camp at Pingo but even then it's a long day hike. The best option is to camp at Zapata, a beautiful campsite that you will probably have to yourselves, and then do the mirador and back to Pingo the second day. The three day option would be do one of the longer day options from Zapata.

-You will more than likely be doing this trek before or after a longer one in the central area of the park. To avoid lugging vast amounts of unnecessary food around you can store food and whatever else you might want to at the administration for without charge.

-Unlike the majority of campsites in the rest of the park there are no facilities at Zapata and are little visited, so for this hike you will have to be better prepared for camping in the wilderness whatever the weather. Any of the treks beyond mirador zapata also require a high level of skill and experience.