All year. Optimal in winter, as the trekking is quite low, and this time increases the chance to see guanacos. 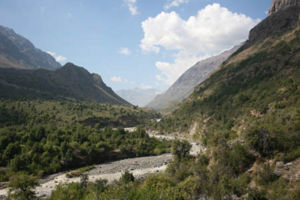 Valley cypresses. Section between the creek and ravine Rapiante Stone House Colorada. The path passes to the right of the small hill, the river separating. Photo: 27 December 2008. 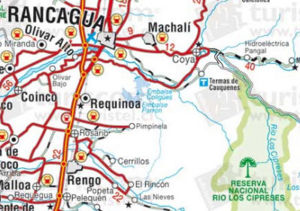 This description is very important, because the map Turistel omitted Cachapoal River Bridge located below the confluence with the river Pangal, and Oficcial map of the Department of Roads (2007) omits entirely the way that runs along the south bank of Cachapoal. We recommend the map shown here, that of the bridge Turistel drawn, either the map of the place in Google Maps, it does showcase the bridge.

From Ranchi, must take the road towards Copper Coya, located 12 kilometers, after passage of a large hill. It is a paved road in good, a place frequented by traffic copper mine El Teniente. Once in Coya, you must enter the village and cross by its main street, which winds along the north bank of the river Cachapoal. Just where the pavement ends, there is a sign that says "National Reserve Cypresses." From this point, are 6.5 kms. by a dirt road in good to an unmarked bifuración. You must turn right and take the narrow bridge across the river Cachapoal just below the confluence with the river Pangal. It should continue after this road to a side street where the road leads to a paved road (2.2 kms from the bridge). Here you turn right and continue on the right floor (across a canal in between) by 2.9 km further up CONAF.

In CONAF should cancel the income ($ 1,500 pp camping) and then continue on a gravel road in poor. Right after there is a bifuración CONAF, where you should turn right, Ranchillo sector. After spending the camping area, you reach a gate with a sign that says "Caution: Area Cougars. Normally, the keys are hanging back. In December 2008, it was possible to go by car 1.4 miles from the gate, to the point where a winter flood of 2008 cut off the road. In January 2008, however, 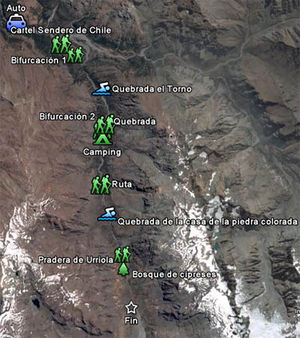 There is only public transportation to Goya. From there it is only possible to hitchhike. It would be successful to reach the entrance to the national reserve (CONAF), but from there is difficult but not impossible, to find a ride Ranchillo. Since there is really unlikely to continue down this path and it most likely is due to continue on foot.

Since the last point accessible by car in December 2008, continue along the road vehicle, along the south bank of the river Cachapoal. After 40 minutes of walking, you reach the Maitenes sector, where a sign indicates that the route belongs to the Sendero de Chile. Few hundred meters later, there is a plantation and maitenes quillayes conducted by Codelco. It should be skirted the plantation without entering it. The trail climbs gently beside her. Then gradually turns left and returns to native planting. After about ten minutes after the plantation is a sign that says "Maitenes" straight and "Urriola" and "Carrizal" turning right, option to be followed. Only 75 meters ahead is a fork to the left (marked in the waypoints of the route as "Bifuración 1"), 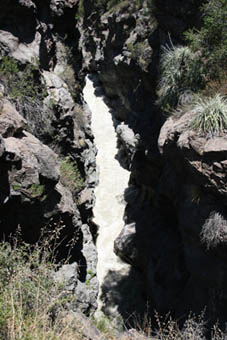 It must continue along the main road, unless you want to visit the spectacular gorge Cypresses, which is encased between the rocks to the point where the river could be crossed in one leap (there is a bridge). This detour takes about half an hour each way and the same back in case you want to visit. Continuing along the main road is a short walk the stream that marked the boundary vehicles prior to winter 2008. Then the path narrows and begins to approach the Cypresses. It will be visible to the north of this river's confluence with the Cachapoal. The direct path now tuck south, always on the west bank of river. It crosses a couple of dry ravines and, after a rise followed by a downturn, there is the ravine lathe, ideal to supply water and bathing in hot weather. Shortly after this stream has a steep climb. 2.3 kilometers below the gorge of the old trail lathe cut by recent river erosion. Where to find this point, one must go back a few dozen meters up leaving bifuración right (marked waypoints in this route as "Bifuración 2"), which marks the beginning of a new stretch of road built to save erosion. Then comes a ravine with a stream of water. 600 meters later you receive a camp site (labeled "Camping"), with traces of fire and tent sites, under the shade of trees. It is a good place to camp if you go through three days and is not reaching the lagoon Piuquenes. 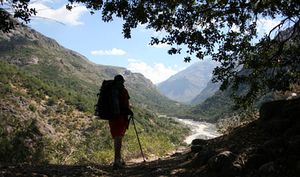 Few tens of meters ahead, the trail again cut by erosion of the river in the gorge of Rapiante. This time NO ONE PASS BY SUPERIOR. The trail gets to the river bed, without being required to remove their shoes. Henceforth, the path is very clear. It passes the foot of large cliffs and behind a small ridge that separates river. About two hours after Rapiante ravine crosses the gorge of the Casa de la Piedra Colorada, with the possibility of bathing, and, according to the season and time of day, can take off his shoes. About 40 minutes are prairie Urriola (which are nothing more than that, meadows) and the first cypresses are visible on both sides of river. A mile farther is the cypress forest, where there are some fences. On the opposite bank of the river is visible a kind of wooden barn quite high. Slightly less than 2 miles later you reach an overlook of the valley. It's the end of the path defined by this route. However, 2 miles farther south is the creek that leads to Lake Piuquenes. 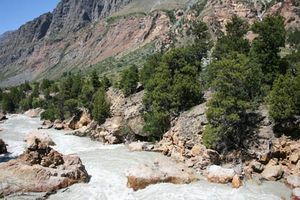 Cypresses at the riverside. Photo: 27 December 2008

Until the viewpoint of the valley which was defined here as "end", consider 7 to 9 hours one way, and between 5 and 7 hours back. It can be done relatively hard two days or three days relaxed. Although not yet described here, the more interesting it would take three days in total to reach the lagoon Piuquenes that trekking on the map appears in the lower left corner

It is common for guards to conduct censuses of guanacos CONAF after the first snowfall of the year. You should call before the CONAF post located at the entrance of the National Reserve Cypresses: Alejandro Maureira, 72-297505