The right time for trekking is between October and April, when it is not too wet 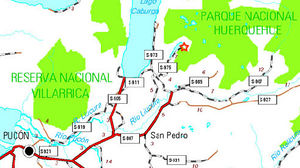 From Temuco to Pucon, are 112 kilometers of paved roads. From Pucón, is 7 miles down the paved road CH-199 international step towards Mamuil Malal, up bifuración where you should take the left towards the lake Caburgua, on Route S-947. 7 kilometers later, there is a new branch.

In January and February, JAC bus operates two daily services from Pucón to the park entrance, leaving Pucon at 8:30 and 4 pm, and returning from the nursery at 10 am and 5pm. Additionally, in summer, buses leave every 40 minutes Caburgua. For about $ 1200 (TBC) allow these buses to reach the diversion that comes to Paillaco (by the first alternative described in access by car). Since there are 14 kilometers of gravel road to the park, along a path that would be quite tiring to walk. The chances for a ride are rather high in the months of January and February, minor in December and March, and fairly low the rest of the year, except for long weekends. 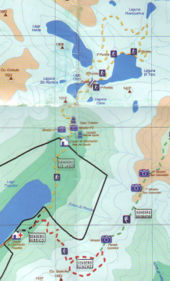 Mapa del trekking de las lagunas de Huerquehue. El trazado de este trekking se muestra en amarillo-ocre
The walk portion of a zigzag climb sharply in the shade of a beautiful forest of tepa, coigües and peanuts. The path is perfectly clear, as the entire stretch from the parking lot to the lagoons is popular in summer months. After about twenty minutes of climb we reach the CONAF booth, where you must register and verify that it has paid for a ticket. The road is continuously rising. After about 40 munutos is reached the fork to the Eagle's Nest Falls. Then they should continue to rise, passing through the small lookout Lake Tinquilco 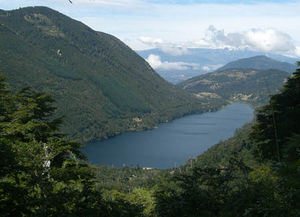 Lake Tinquilco from the trail. Descend toward CONAF. 02/09
. Then they must pass the turnoff to the waterfall Trafulco (must get to observe). After the second viewpoint, to 1094 meters, the trail increases the slope always zigzag. After about an hour from the Cascade Eagles Nest is reached beautiful Lake Chico. It has reached the plateau of Huerquehue, and thereafter the route becomes rather flat, with gentle ups and downs in the middle of a forest and Araucaria coigües. He must cross a narrow stretch of the Lake boy by a wooden bridge and then around the lake for a nice stretch along the east coast of the lagoon. Just after crossing a tributary of the lake (the stream that drains the lake El Toro) a fork. It should be right. Do not take the path that goes to the left, pointing to "Laguna Verde". 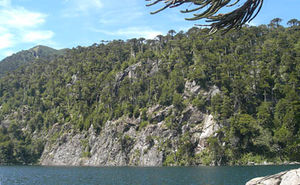 Laguna Toro. First lace. 02/09
Then you come to a pleasant and scenic peninsula on the southwestern tip of Lake El Toro (on the map marked as "first peninsula"). Good place for lunch and take a bath. Then she must undo a few yards and re-take the main path towards the right, to skirt the Bull. After about 20 minutes from the first lace, you reach the north end of the lake, marked on the map as "fourth lace, a quiet area of reeds and bower. We must continue to 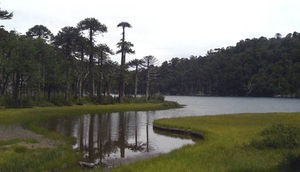 Far north of the lagoon Toro (Fourth Puntilla). 02/09
the main path, ignoring a path CONAF closed today leading to the Laguna Seca and Escondida. You must climb a gentle slope area, continuing northward. Gaps have been finished by now, and the footprint is still surrounded by Araucaria. After about 25 minutes from the fourth lace, you reach an open area. Here there is a wooden sign with a map and a fork. If you follow the right and carry on towards the Crossing of the Huerquehue Park, if you take the path to the left, begins the road back to finish the circuit Huerquehue Lagoons

To access into the park, each adult must pay CLP $2.500. Aditionally, CLP $10.000 per tent are charged at the entrance to stay in camping Renahue.