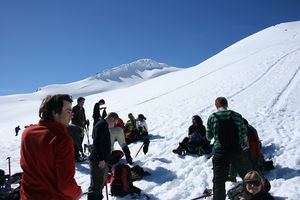 Rest on the climbing route of the Villarrica Volcano. September 2008 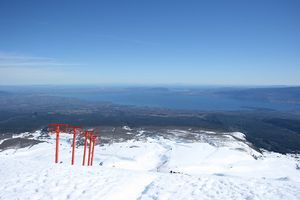 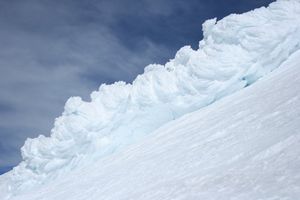 Cornice of ice and snow in the high section of the Villarrica Volcano. Sept / 08 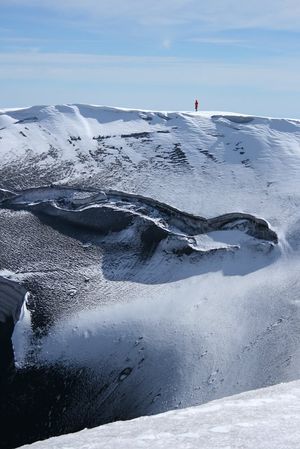 Crater of the Villarrica Volcano. September 2008

The Villarrica Volcano is an attractive ascent of the Chilean Lake District. It is the second most active volcano in the country (after the Volcán Llaima) and one of the most active volcanoes in the world. From its summit the volcanic activity and fumaroles are appreciated, and an excellent view of the zone is obtained, including the neighbors Volcán Quetrupillán and the highest and border Volcán Lanín.

Between June and October, but especially around September, it is one of the best destinations in Chile to practice randonnée, although on weekends it becomes too busy.

The crater has a diameter of about 200 meters. In the center there is an open fireplace about 40 meters in diameter with a lava pit inside

There is a ski center on its northern slope.

Starting point is the ski center. From Pucón, head towards Villarrica until you reach a well-marked fork at km 1. The road to the volcano is paved in its first steps and then it is made on a wide gravel road in [state of the way | good condition]. In km 9 there is the entrance to the National Park with the control CONAF. Soon after, you have to turn to the right and start climbing zigzagging in wide curves. At km 15 the first cableway arrives, called "Juncalillo", and finally, when leaving the forest, the road ends at the parking lot of the ski center (km 17). From Pucón it is about 30 minutes of travel in own vehicle.

There are no buses to cross the ski center, but throughout the year there is significant traffic, even more in winter, and there are many possibilities for automatic access, stopping at the corner of the road to the volcano with the main route connecting Pucón with Villarrica. 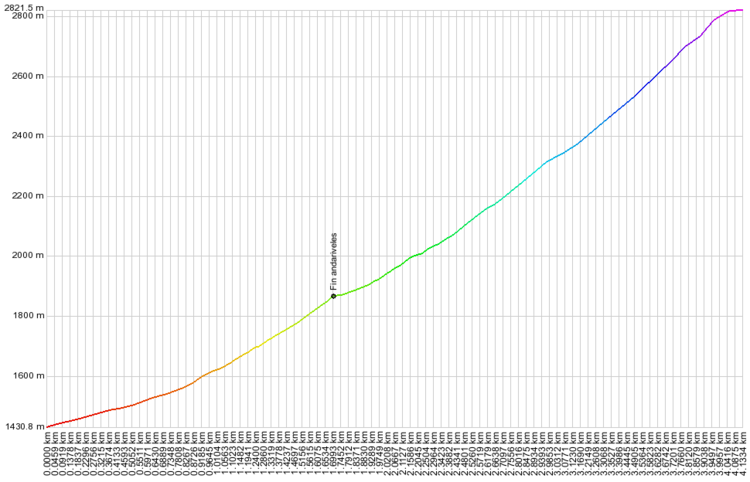 Climbing profile of the Villarrica Volcano

The ascent begins at the Ski Center. between June and October or the beginning of November, the vehicular road is passable only to the cableway called "Juncalillo". At that point, in winter and early spring the options are two:

From the Ski Center itself, also known as "The Cafeteria", point towards the No. 5 lighter, which starts at about 200m on the right, looking towards the crater (1470m). The first part of the walk is in the direction of the house that marks the end of this lift (1,860m). In winter and spring the chair can be used, paying $ 8,000.

There is a route that leads directly to said house. The most common, however, is to advance along the vehicular road to a curve where it turns to the base station of the No. 5 lifeline. On this curve begins a path that goes up the slope of the ditch and then continues below the line of the lifeline. The last third of this stretch of the route is steeper and rockier. After 45-60 minutes of walking, you will reach the house that marks the end of the No.5 cableway and the ski fields in the center.

From this point, the route goes to the left according to the direction of travel, and heads towards a rock called "Piedra Negra", which is reached after about 15-20 minutes (2,020m). In its vicinity there is a cement construction called "Capilla", which indicates the end of ski lift ski center that was destroyed by the volcanic eruption of 1971.

After another 20-30 minutes through a rocky terrain the "Pingüinera" (2,250m) is reached, from where there will be snow even in the middle of summer, and which may require the use of crampons if the weather conditions have given it ice characteristics .   From the Pingüinera, the options are different depending on the time of year. In late spring and summer more is used on the left (east), shorter but also steeper. From the autumn until mid-spring it uses the route to the right, farther west, which leads to a phylum located behind another boulder called "Piedra Blanca", which then heads directly towards the crater. Above, both alternatives are separated by a lava flow, and are re-united to 2,730m, already very close to the crater, at the point where the route on the right crosses the wash through an opening in the rocks, at 60 -90 minutes from the Pingüinera.

The edge of the crater is now only about 10 minutes higher. The last section is the steepest, and the one that requires more attention if you ascend using skis.

Consider about 3 to 4 hours of promotion. It is common for groups of tourist agencies to have some slower members and the promotion takes about 5 hours. The descent takes about 2 to 3 hours.

All year. The ideal in November and the first fortnight of December, when the snow is hard and there are not so many tourists. In January and February the influx is massive. In the middle of winter, randonnée skis are ideal, although the Villarrica Volcano has so many tourists (it can be up to 400 on a good weekend day) that the trail is usually marked even in winter, so the rackets are dispensable.

Exceptionally, in summer a very strong wind can blow, called puelche , which does not prevent the ascent but makes it less pleasant.

Regrettably, and due to the numerous accidents experienced in the past, the Villarrica Volcano 'can not be climbed independently without a valid ID card of the Chilean Federation of Andinism' . That is, you must be a member of a federated club. Those who are not members of one of these clubs, can only make the ascent accompanied by guides, from any of the many companies that offer this service from the city of Pucón.

Apart from that requirement, CONAF charges the right of promotion $ 4,000 per person.

In order to comply with the previous requirement, a wide offer is offered in Pucón, which normally brings groups together at 7 AM in the city. The activity is quite regulated, equipment is reviewed periodically and the guides have to be certified. Depending on the time of year and the conditions of the volcano, a maximum number of walkers per guide is determined, usually 6. The most serious agencies also have a guide assistant, if there are three or more people, who takes care of the remaining hikers halfway to the ascension due to lack of strength.

Here some options (prices include equipment and transportation, but not food):

There are also the following options: