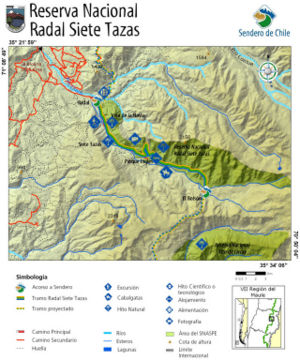 Map of the national park

Best time of year to go 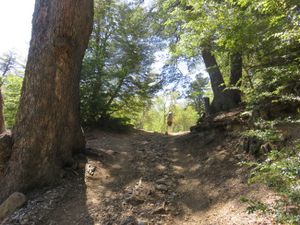 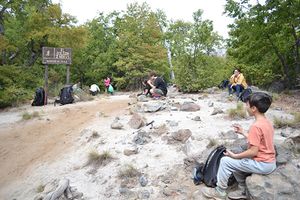 Two hours down the hill from Refugio El Bolsón 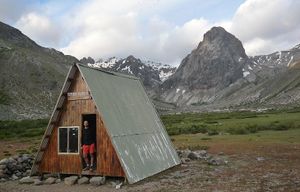 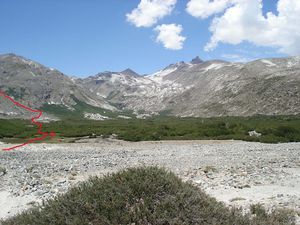 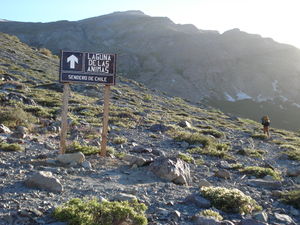 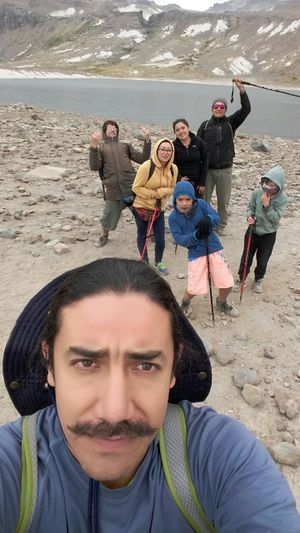 On the shoreline of Laguna de las Ánimas. Early April 2016

Between October and April. During the rest of the year, it gets really cold and the top end of the trail tends to be covered in snow.

First of all, just for the avoidance of doubt, although it is situated in the same protected wilderness area as them, this route does not include the actual Siete Tazas waterfalls, which are accessed by way of a short boardwalk located further down the hill, in other words not as far up the road from Radal. The first half or so of the Laguna de las Ánimas route simply consists of hiking up the trail to Refugio El Bolsón, which is a very popular standalone trek in its own right and takes four hours, one way. The hike to Laguna de las Ánimas is therefore the "complete" trek for the national park, whereby you cross from one end of it to the other (and then back again). The upper part of the trek is located around the head of the valley of the Río Claro -- the Siete Tazas river. Don't get confused by the nomenclature. In reality, Laguna de las Ánimas itself is a small mountain lake, situated just outside the park boundary.

The starting point of this trail is at Parque Inglés (km 0 of the trek - 1100m above sea level) which is where the access road into the national park ends, and where people have to park their vehicles if they wish to proceed any further. You'll need to sign in at the CONAF rangers' office on the left-hand side of the road. Start the walk by passing around the back of the CONAF base complex through a turnstile following the signs to the trails. After you get out of the complex, you need to turn right onto a dirt road which then bears around to the left. 150 m further on, you will see a path, which exits the dirt road to the right, along with a route sign pointing in the direction of Refugio El Bolsón, and that it's four hours' walk away. This is the trail you want to take. You have to keep following it until you get to Refugio El Bolsón, ignoring all of the secondary paths that you'll see branching off to the sides of the main route as you go along (most notably, Sendero Mala Cara and Sendero La Montañita). Try not to forget this! 🙂 On the way, you'll see signs saying "3 hours to go", "2 hours to go" and "1 hour to go" in Spanish -- see the second photo in the column of images to the right of this text -- which will give you some idea of how close you are to your destination. Obviously, the time periods that appear on these signs are only rough estimates but they should be reasonably accurate for a person walking at a normal pace. Most of the signs along the route to Refugio El Bolsón are clearly marked and there aren't very many places where you can expect to get lost easily.

The opening section of the route is very pleasant. It passes through dense forest and has a relatively flat gradient. After about 20 minutes of walking, you'll get to a small clearing (km 2.4 - 1212m). A few steps further on is a small stream, which gets dried up by the middle of summer. You'll then pass a quincho [= a simple, local wooden gazebo] and a wooden sign with a map on it just ahead of it, in the same clearing. You'll also go past the entrance to Sendero Mala Cara less than 10 minutes later. In km 3.7 of the walk (altitude 1282m), you reach a fork in the trail . You need to take the right fork in order to keep heading towards Refugio El Bolsón instead off veering off left to Sendero Montañita. There are signposts there to help you out. 330 metres further along, you have to cross another stream.You then have to keep following the trail as it winds its way uphill, through the southern beech forest. After another hour's walk, the scenery begins to change. The vegetation thins out considerably and turns into scrubland.

At km 7.3 of the trek (1520m above sea level) you have to cross a moderately wide stream, which flows down from Cerro Piuquenes. Just 600 metres further ahead, the trail arrives at the Río Claro, which carries a much greater volume of water and has a very powerful current. DO NOT ATTEMPT TO CROSS THE RIVER. Just keeping walking along the north bank. Further on, the climb starts to get a little bit steeper. After a few more minutes of walking the Valle del Indio starts to open up on you. You'll see ñirre shrubs all around, and should be able to make out Cerro Tres Puntas and the Salto del Indio (a waterfall, pictured below), in the distance. About 45 minutes after you cross the stream, you should get to the small CONAF shelter: "Refugio El Bolsón" [km 10.1 -- Altitude: 1686m], which is also a camping area. There is plenty of space to pitch tents close to a small brook that flows through the site. This camping spot also offers an outstanding view of a dramatically steep and rocky peak -- the appropriately-named, Colmillo del Diablo [= The Devil's Fang], which is located just two kilometres to the North.

On leaving Refugio El Bolsón, the trail heads upwards and goes through an area of ñirre shrubs. You have to be careful around here because it's easy to get lost. There are several orange arrows that point towards the river, but they take you to the "Salto del Indio" waterfall rather than Laguna de las Ánimas so, watch out for that. After about 20 minutes of walking you will have made your way through the first area of ñirres plants. You then carry on through a clear and open section in order to cross a wide and rocky ravine, with little in the way of vegetation growing inside it.

Just beyond the rocky ravine, you get to a meadow with more ñirre bushes. The path basically crosses this section close to the foot of the slopes on the northern side of the valley. Having said that, it's really hard not to lose sight of the trail. Keep following it by looking out for bare patches where there is no grass growing. Unfortunately, the ñirre bushes' branches tend to cover up these bare patches. So, just keep being patient, and wherever possible, try to break off the branches that you find are creating the most obstruction, in order to help out anybody else who uses the trail after you.

After passing through the ñirre scrubland the path crosses a dried-up stream, where it gets to yet another a another load of bushes, albeit less dense than the previous ones. From the dried-up riverbed, looking towards Cerro Tres Puntas, you should see signs that point the way to “Laguna de las Ánimas”. From the route signs, you should carry on along the bottom end of the sparsely-vegetated slope, a little bit higher than the floor of the valley. Without crossing the ravine, and immediately behind the signs, is where the climb really begins -- undoubtedly the most arduous section of the trek. It typically takes an hour and a half to walk up "Cuesta Las Ánimas", which you have to do by way of some major zig-zagging over rocky terrain. There are a couple of good rest stop locations along here with beautiful views down into the valley. Once you have finally hauled yourself up on to the ridge (km 14,6 - 2260m), you could well find that it's rather windy up there.

Once you are up on the ridge, and on the final straight, things get considerably easier. The path heads eastwards towards Laguna de las Ánimas. It goes gently downhill and then gently uphill. The last CONAF sign on the route indicates that you have arrived in the vicinity of the lake (km 16,0 - 2283m). The lake is a somewhat diminutive yet picturesque Andean water feature with a white sand beach. The lake water, unsurprisingly, is very cold. It's definitely a scenic place to spend the night in a tent 🙂

(Per day. PRICES IN CHILEAN PESOS) 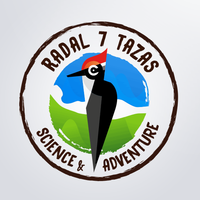