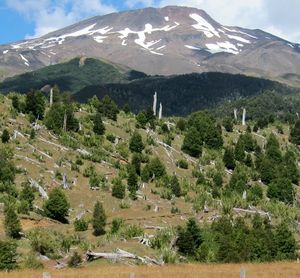 Quetrupillán Volcano from the Fundo Paraíso parking lot. The route starts to the right immediately after the wire barb 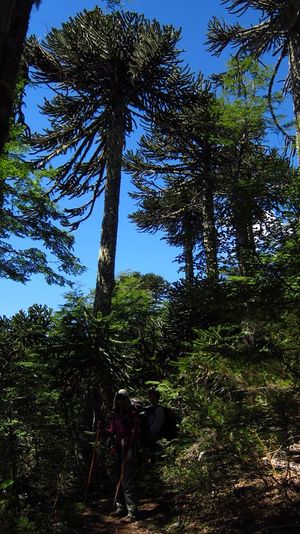 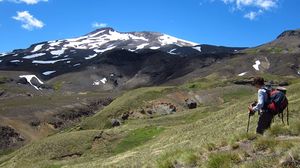 South-Western Faldeos of the Quetrupillán Volcano, looking northeast (note that the walker goes in the direction of return, from Laguna Azul to Paraíso Escondido)

An excellent trek for the day. Ideal for vacationers of Pucón nuances the holidays with a different day. It includes a walk through the coigüe forest, araucarias, a walk over the limit of the vegetation at the foot of the Quetrupillán Volcano, a sublime view of the Volcán Villarrica and a very good view of the Volcán Lanín ] The final destination is compensated with a waterfall on the edge of a little-visited mountain lagoon.

From Pucón you must take route 199 (international road) in the direction of Curarrehue. Approximately at km 20 it turns to the right towards the Villarrica National Park. It is recommended to set the mileage to zero. The road, gravel in good condition, increases progressively. At Km. 10.9 there is a detour to the Palguín hot springs on the right ($ 7,000 each). Continue on the left. At Km 13.6 you should leave the main road and take a small detour to the left, towards the parcels of "Hidden Paradise". 400 meters further on there is a gate, normally open. If there is a guard, you must indicate that you will go to Fundo Porvenir.

An estuary is then crossed, and it continues ascending. At km 14.6 there is a fork: take the LEFT. At km 15,1 there is another fork: again LEFT. The road is now gravel in regular state. At km 16.7 there is a third fork: again, take the LEFT, following the sign that says "Al Mocho". The last section is the roughest. At km 17.9, you reach Fundo Porvenir (it has a gate and a sign) where you can enter and park the car. There is the house of the Ulloa Family.

If you have a GPS device you can use the following file to get from the detour on route 199 to Fundo Porvenir:

There is no public transport to Fundo Porvenir. There is the possibility of taking one of the frequent buses that connect Pucón with Curarrehue (700 pesos for the entire trip) and get off at the intersection between route 199 and the road that starts towards the Villarrica National Park (and also towards the farm). From that point it would be necessary to continue in a private vehicle, which seems difficult, but nothing is impossible. 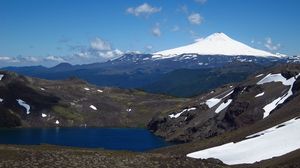 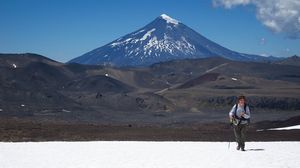 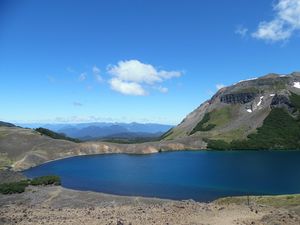 The route starts at Fundo Porvenir (1040 masl), from the side of the Ulloa family's house, the owners of the property. You must start the walk in direction E (the volcano is seen in the background). A few meters from the start of the walk, immediately after crossing the barbed wire that closes the Ulloa garden, there is a sign: to the right, by a narrow path, it is towards Blue Lagoon. If you continue straight, you will go to the summit of Quetrupillán Volcano and Circuito Quetrupillán - Laguna Blanca - Laguna Azul

The route loses part with a little slope advancing towards the southeast, and runs parallel to a stream. A few hundred meters, however, the vegetation becomes denser and the slope greater.

At km 1.51 (1160 masl) the path turns almost 90º to the south, faces the slope of the slope and becomes steeper. At 1270m there is a map of the route (although it is very unclear to indicate the essential "you are here").   At km 3.38 (1460m) you come to the confluence with the Villarrica Traverse. There is a sign indicating that there are 12 kilometers of walking to the nursery of CONAF to the right (down). For Blue Lagoon, you must instead turn left, and continue ascending.

It passes next to a sign of "Km 46". There is no other option but to follow the path, because without it it is almost impossible to advance through the dense understory of the Araucanía. It passes under beautiful araucaria forests. Above, the forest is squat, with small lengas crushed by the meters of winter snow.

Immediately after leaving the forest, at 1600m, there is a camping site, marked with a sign. After this, the trail continues to the east. You pass by a sign that says "Vista al Quetrupillán" (thanks for the warning!). After that, the rura turns progressively towards the south, to cross the wide flat zone that conforms the southwest slopes of the Quetrupillán Volcano.

An estuary is crossed immediately after which it passes next to a sign indicating "A Blue Lagoon". At 1660m, a few meters above that last sign, the route turns sharply towards the southeast. It is then passed through a steeper ascent zone and subsequently next to a "Km 50" sign. Laguna Azul appears on the right (south), but much lower. Just before the pass (the highest point of the route), there is a small vulcanological station on the right (south) of the trail. The highest point is reached at the pass located at 1920m, kilometer 8.87. Now it remains to descend 320 meters to the shore of the lagoon. At this point, the Lanín Volcano appears to the east, while the Villarrica Volcano is left behind.

Then begins to border the Blue Lagoon in the east. The view of the Lanín Volcano is spectacular throughout this sector. If the path is covered in snow, which will happen at least until the beginning of December, it may be somewhat complex to intuit the location of the footprint in this section, so a GPS is welcome (although not essential). This section is completely devoid of vegetation, with characteristics of half mountain.

The trail continues descending, always on the east of the rocky spur that crowns the slopes that come from the lagoon (reason why the lagoon is normally out of sight). At 1790m, there is a flat sector with an extraordinary viewpoint of the lagoon with the Villarrica Volcano in the background. You pass next to a sign of "Km 52", and then the trail goes down with more slope. Just before reaching the south bank of the lagoon there is a pronounced zig-zag.

After the zig-zag you reach the south bank, an excellent place to rest, eat and bathe if the weather invites.

Consider 4.5 to 5 hours of promotion, and 3.5 hours of return. There is a conflict regarding charges for use of the trail. There are two owners, currently in legal dispute, through which the trail passes.

The rest of the trail, even before reaching the Villarrica National Park, is owned by another owner. Depending on the luck, you can meet the guy (called Rodrigo) who currently charges the "right to step" (be careful with him, says being the representative of society, walks on horseback, is armed with a gun and machete and with a Akita race dog and another mestizo).

According to the instruction that he gives, the property belongs to a company called Campo la Montaña, it must be notified 24 hours in advance. The access value is $ 5000 (US$ 8.2 as of May 2018). The notice must be made to the mobile +56999786153 and emails cuo@holdingfrontera.com and luisfelipediaz21@hotmail.com. For payment, deposit or transfer of funds can be made to the current account of Banco Santander No. 65-66275-2 under the name of Asesorías e Inversiones Lito S.A., RUT 76.147.759-5. Once the payment is informed, a document of release of civil liability will be sent via e-mail, which must be delivered signed at the moment of starting the promotion, or else carry this document in case of meeting the caregiver. Those who do not comply with this requirement and are not registered will not be allowed to enter the access path.

It is also possible to camp in Fundo Porvenir. It charges $ 5,000 per person per night, but is only charged if you camp on the same farm.