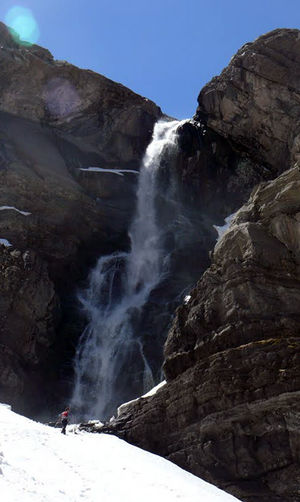 The right time for this route is from September to May. There will be enough snow from June to August

From Los Andes, take the international route to Mendoza CH-60. We must continue along this road for approximately pass the Old Guard and control, 6.3 miles later, turn left onto a dirt road vehicle on regular condition that the internal Quebrada del Estero the Rock. They are 2.8 kilometers of road vehicle, built for the construction of the hydroelectric plant. However, it is recommended to park about 100 meters before the end to avoid crossing a ditch that crosses the road.

You can easily reach this point in one of the numerous buses that run from Santiago to Mendoza. Among other, you can take Ahumada, El Rapido, Cata, Tac, Tur Bus and Andesmar. Most of them depart from Los Héros bus station. They charge about CLP $12.000 per person to Mendoza.

Profile of the short route del Estero The Rock

The route begins in the conducting channel of the hydroelectric plant. From this point you should start walking toward the north. It is quite evident, because the waterfall is visible from the car itself. You must walk about 100 meters along the canal to the stream itself. At this point, begin to ascend the west bank of the creek, climbing a slope initially somewhat rough. Then he continued making progress for about 10 minutes by a relatively clear path to cross a small stream secondary. Just after this, there is a haven of carriers at the foot of a large Rocon. Then he should follow up the valley for about half an hour, in between bushes and rocks scattered to the foot of the waterfall. There's nothing like getting lost on a route so short and so encased. The waterfall is about 20 meters, and discharge from the melting glacier of Cerro Gloria, whose ascent route this short trek is only the beginning.

At a normal pace, this trek should take about 40-50 minutes until the fall, and about 25 minutes to return. In view of brevity, only recommended as complementary to those who are walking in the area, but does not justify a special trip from Santiago or from the central coast. It is, for example, a good addition if you go to Glaciar del Juncal or Laguna del Inca.