(updated as of January 2011) The hotsprings consist of only three small pools of lukewarm water, and there a no facilities such as bathrooms or dressing rooms

the road is passable by vehicles, so that is not an alternative trekking.

away from the dam. For that reason, unless there are several days not a good idea since shortly after a snowfall. From September, it may be necessary to remove the skis in some sections that border the reservoir. 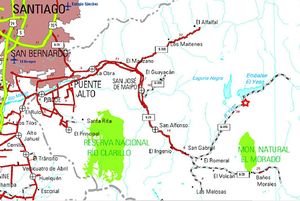 Access Map. The onset is shown with a red star. File: Department of Roads

Map of the route. The layout is only referential. It reaches to appreciate the Chile argentina

The route described here starts at the dam, although it is likely that the Snow forced to start a little lower. However, it is only immediately after snowfalls that will fail the Andean water facilities, 1400 m before the dam itself. From this point you should begin to move eastward to the vehicle along the road surrounding the reservoir for its southern shore. Are some 6.7 kilometers along the coast. In winter, the ground is difficult because in many places the snow-laden slope falls steep slope to the reservoir, the road is cut repeatedly by residual snow boards of avalanches. 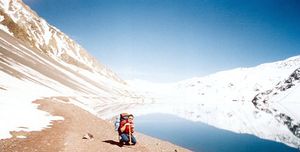 Way of the vehicle southern shore of the reservoir, taken from east to west. You can see little snow skiing in that stretch, but the rest of the route after the reservoir presented no problems on that date (September 2001)
If you are in

skis, you should know how to sing well in this area. Once you arrive the east end of the lake, the terrain is much easier. Continue inward toward the northeast by a low slope area, where the valley is quite wide. It will be visible from the towering pyramid somital

kilometers downstream of the dam soon after a monument to Andean waters workers killed on the spot, the road turns almost 90 °, and the walk continues towards the southeast. It should be gaining 5 miles, on the north bank of the river Gypsum, on a stretch of more pending. It is an area which in summer is usually covered with grass and often inhabited by animals.

Camping just hundred yards from the hot springs. Photo taken from northeast to southwest. It seen in the background the Mesón Alto. September 2001
Then, the valley

extends brought many, and appear to the south the glaciers of Marmolejo. Our route turns gradually to the north. Call go 2.9 miles to the west bank of the estuary, the point at which the road turns east to cross the river and reach the hot springs at the foot of a gorgeous warm water upwelling from mid - the rock.

take about 7 to 8 hours one way. If you do not have snowshoes, and leaves only shoes, this time may be even higher if the snow is deep and unconsolidated. A little less to return.