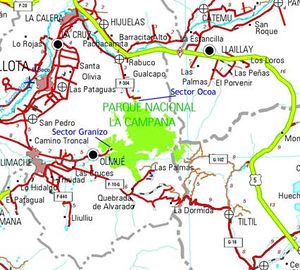 All year round, however, the ideal time will be spring or late winter.

It can be accessed by public transport to the Ocoa sector of the La Campana National Park from La Calera or from Llayllay. From the bus terminal of La Calera, a taxi charges $ 6000 to the entrance of the park. 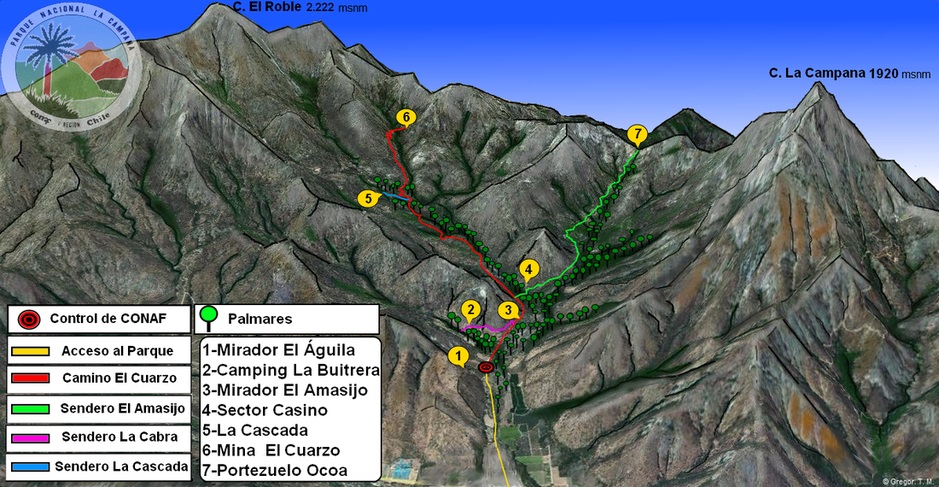 Map of the trails in the Ocoa sector, in the La Campana National Park. Image: Gregor 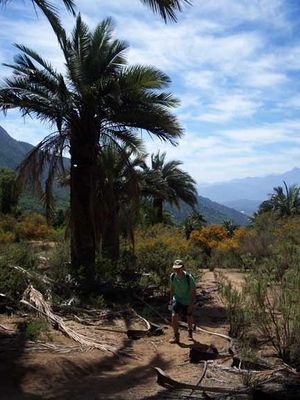 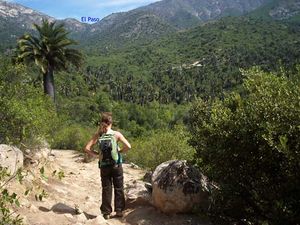 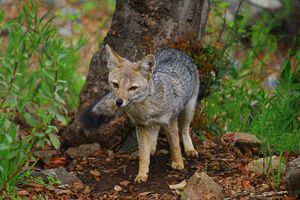 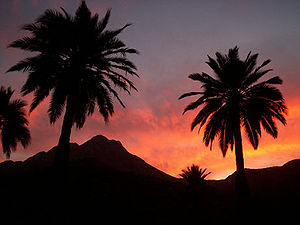 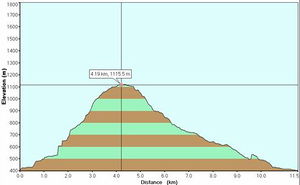 The route can be from south to north, or from north to south. The first alternative will be described.

From the Conaf Nursery walk for 600 meters on the road, when you reach the camping area, go through the path of the climber for about 5 minutes where you will see the "Sendero Los Peumos" which should be taken. This runs through a leafy and humid native forest (see image). The trail climbs moderately. After 35 minutes of having taken the Los Peumos Trail, we cross again the route of the cars that we walked previously. From this moment the vegetation ceases to be so exuberant.

Follow the route for two curves, where you will reach another fork. The secondary road will take us after 500m to abandoned facilities of an old mine. You must take the main one. To avoid walking along the car route after the fork take a path that runs parallel to the route but slightly more to the east (right). After 300 meters they are separated definitively. The path begins to gain height following the edge of a hill in a westerly direction, after 45 minutes of climbing, in some sectors with quite a slope, you reach the step (see image). From here you will have a spectacular view of the valley of Ocoa, full of Palms and something arid, gives the impression of having retreated to the Jurassic. The contrast with the Cajón Grande and Granizo valleys to the south is strong. The latter with a very different vegetation and significantly more leafy.

After enjoying this beautiful panorama for a while, the descent begins. The path is quite clear, there will be no chance of getting lost. it drops abruptly for 30 minutes until it reaches the valley where the slope decreases considerably, making walking more pleasant and expeditious. From the beginning of the descent, the path goes between palm trees on the western slope of the eastern hills of the valley. When you reach the last hill the direction changes to Northeast, after 10 additional minutes you will find the main route of the Ocoa sector. From the pass to the Casino Sector, 1.5 hours of walking (5km). Take the route in the north direction to go to the nursery, end of the crossing. If you still have the courage and energy to continue walking, if you take the path to the south you can visit a beautiful waterfall and a quartz mine (more information in trek: P.N. La Campana, Ocoa). After 25 minutes along the trail you will reach the Ocoa camping area, in an additional 10 minutes at the park entrance and end of the trek.

At a normal pace, this trekking should take around 6 hours, round trip.