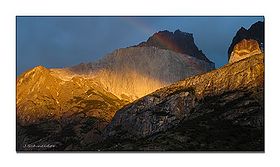 From Italiano Camp, the trail goes down toward the southwest and continues along the northern shore of Lake Nordenskjold, at the foot of the massif of the Cuernos del Paine, whose impressive granite walls are visible most of the way. First you must cross a wooded area. After 10 minutes, an area of peat and vegetation stunted by the wind is reached. This entire section usually has a lot of mud, although there are wooden bridges in the worst areas. The path is gets closer to the lake, until it reaches the shore. Then it follows the beach, and it goes back to the forest after that. We return to the forest to reach the camping / shelter Cuernos, right at the foot of the Cuerno Este (2,200 m), as well as the stream that descends from the Bader Valley. That's about two hours from camp Italiano. It is also a beautiful viewpoint. There is a camp fee.

Just after that, a creek is crossed by a wooden walkway. Then it ascends to continue parallel to the lake. The Bader Valley, a beautiful but rarely visited area of ​​the park, is visible to the left, between the Cuerno. You come to an area of ​​numerous streams, that requires several ups and downs before it stabilizes. There is a beautiful view of Nordenskjold lake to the right.

The trail then continues farther from the lake, at the foot of Almirante Nieto (2,640 m) until it reaches a small lake on the right, next to a wetland. From this point begins the descent to the lodge.

Shortly before the Hosteria Las Torres is visible, you will se to the left the path that goes up to the base of the Torres del Paine. A suspension bridge crosses over the Ascencio river and then finally heads to Hosteria Las Torres, where there is also camping and a hostel sector. There is a forest of ñirres and several creeks. The place is very busy between December and February.