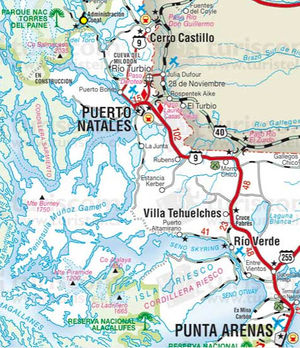 To get to Punta Arenas there are three options:

Depending on the amount of time availabe and on your resources it is advisable to combine different means of transport to get in and out of Patagonia, thus to get a fuller view of the region.

From Punta Arenas there are 254 kilometers by paved way to Puerto Natales. From there, there are two options: 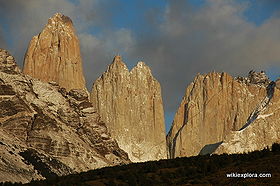 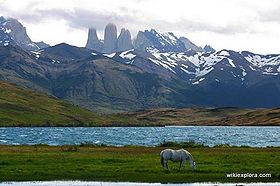 Buses from Puerto Natales to Torres del Paine National Park will leave you at Laguna Amarga. From that point, it's about an hour of additional hike along the road to Hosteria Las Torres, the usual start of the trekking. This last stretch can also be done in minibuses that wait for the arrival of the buses from Puerto Natales.

Puerto Natales - Torres del Paine National Park From Puerto Natales, between December and February there are two buses a day to the park, at 7 am and 2:30 p.m.. In November, March and April the are only buses that depart at 7am. 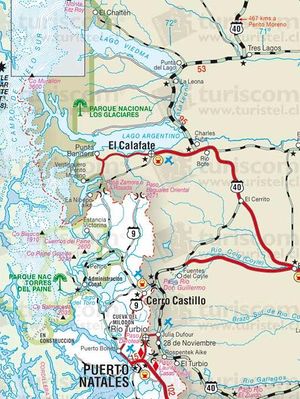 From El Calafate, it is 284 kms to the border in Río Don Guillermo, close to Cerro Castillo. From there, it's another 58 km. of gravel road to the CONAF post at Laguna Amarga, in Torres del Paine National Park.

El Calafate, in turn, is located 215 kms south of El Chalten, the other trekking hot spot of the region.

The trip takes 5 hours to Puerto Natales, but it depends on the immigration control in both Argentina and Chile.